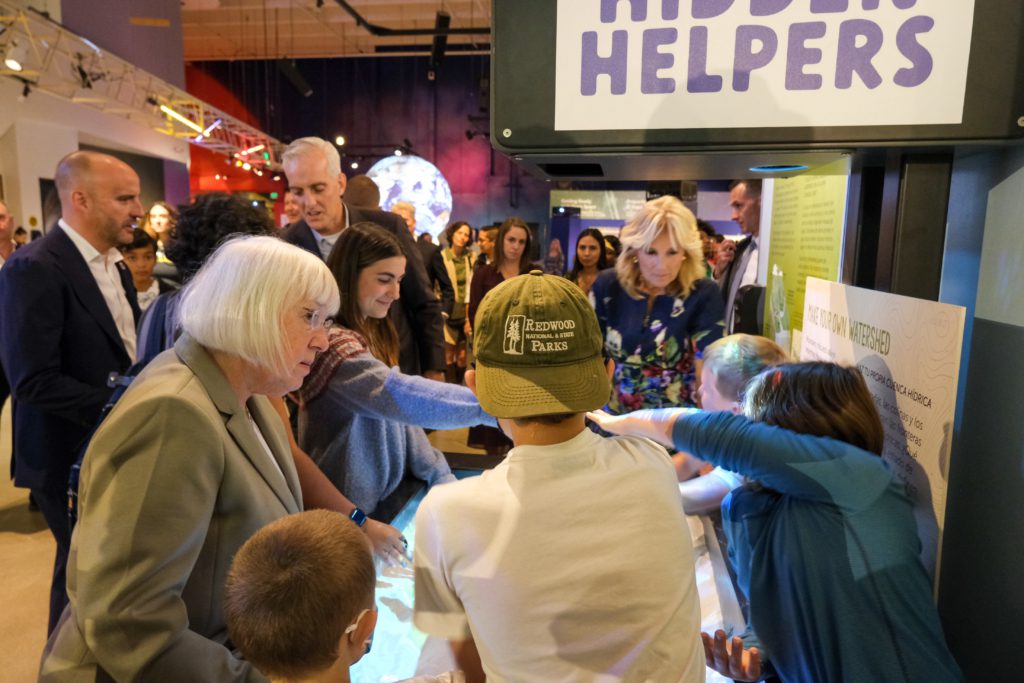 Steve Schwab, CEO of the Elizabeth Dole Foundation speaks to the Foundation’s work and partnerships to support military and veteran caregiving families during a media roundtable at the Pacific Science Center on October 8, 2022. The event recognized, “hidden helpers,” the children and youth who help care for a wounded, ill, or injured veteran parent or guardian at home. Hidden Helpers is an initiative of the Foundation and WWP, launched by Senator Elizabeth Dole and Dr. Biden at the White House in 2021, in conjunction with Joining Forces. The initiative is designed to create supportive programming for the children of America’s 5.5 million military and veteran caregivers.

At the event, Dr. Biden, Senator Murray, Secretary McDonough, and Steve Schwab, CEO of the Elizabeth Dole Foundation had the opportunity to speak and play with military and veteran children and their families. Children and youth in attendance had exclusive access to the Pacific Science Center, connected with other military families, and created special memories with their community and loved ones.

During a media roundtable with Washington State military caregiver Kristin Christensen and her daughter, hidden helper Avarie, the leaders spoke to the hidden work that caregivers and their children do in their communities to care for their wounded warriors.

“At the Foundation, we support the nation’s nearly 5.5 million ‘hidden heroes’ … and it’s our responsibility as a country—it’s the responsibility of everyone in Washington state and in Seattle, as the Pacific Science Center did today—to support these families, to welcome them, to embrace them, and to help support their loved ones,” said Steve Schwab. “The Foundation is proud to work with folks like Senator Murray and the VA to provide the day-in and day-out support they need every day and that they’ll need every day moving forward.”

“I want to thank all the families for all the sacrifices they’ve made,” said Dr. Biden. “A day like today is so great to celebrate the families, as you well know, families serve alongside their loved ones. I can’t thank you all enough for… doing this roundtable and just creating awareness that even though we are not at war, our military families have sacrificed so much for us, and we need to give back and never forget.”

“There are spouses, kids, grandkids, and ‘hidden helpers’ across our state who step up every day to help a family member who sacrificed for our nation. We owe them a huge debt of gratitude—but we owe them far more than that too,” said Senator Murray. “I’ve heard from so many hidden helpers about how they can feel isolated, or that they don’t have anyone to talk to about their experience. That’s why events like today are so important—an opportunity for families to come together, share an afternoon of fun, and connect with other people who share a similar experience.

“Veterans who are in our care are with us for such a short period. Where they spend the rest of their time is with you; with their families. It’s really important that we’re very focused on the whole, so we can provide that support for those heroes,” said Secretary McDonough.

This was the first major event dedicated to the Hidden Helpers initiative since its’ initial launch in November 2021 at the White House where a groundbreaking study by research firm Mathematica was released, detailing serious concerns for the 2.3 million children of military and veteran caregivers in America.

The Elizabeth Dole Foundation and WWP co-chair the Hidden Helpers Coalition, comprised of more than 75 public and private sector organizations dedicated to creating resources and initiatives that will directly respond to the gaps in support identified by Mathematica. In response to the research findings, 40 unique commitments were announced at the Hidden Helpers launch to support children in military or veteran caregiving families and enhance services available.

Adding to the growing list of partners who have pledged their support to hidden helpers, Lockheed Martin has provided a generous donation to power the creation of evidence-informed content and peer support opportunities. Built by helpers, for helpers, this initiative will create tailored solutions that give military children and youth the skills and tools to help them thrive.

The Foundation is also partnering with The History Channel and A+E Networks to launch the first-ever ‘Untold Story Challenge,’ this November. This initiative will shine a light on the stories of America’s military-connected, caregiving youth. With the support of The History Channel, this is a first step in ensuring hidden helpers, who are unrecognized in the public consciousness, will feel hidden no more.

Additional photos from today’s event can be found here.