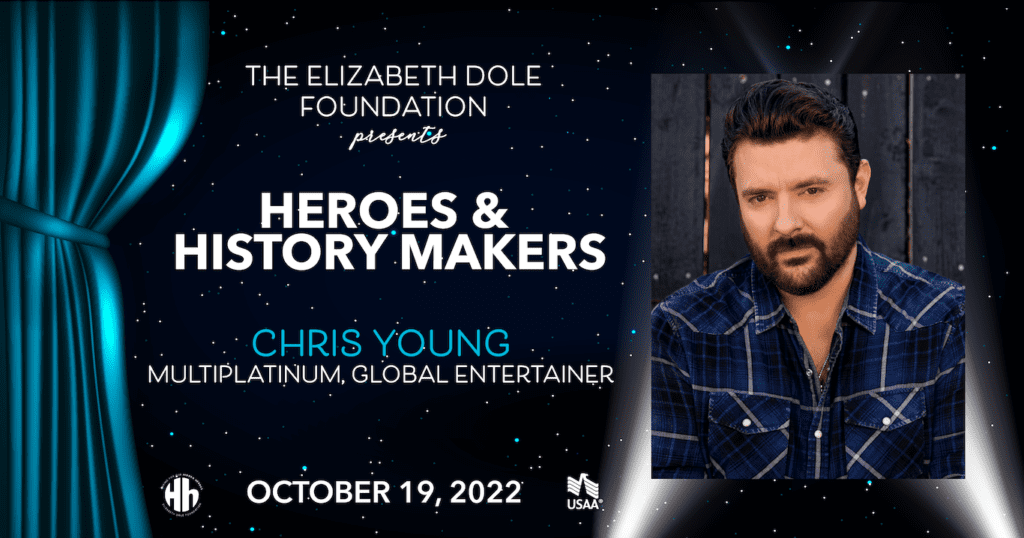 Washington, D.C. (Sept. 29, 2022)— The Elizabeth Dole Foundation announced today that multi-platinum, global entertainer Chris Young will perform as the musical headline act for the Foundation’s Heroes & History Makers event on October 19, at The Anthem in Washington, DC and streamed live. Joining Hidden Heroes Campaign Chair Tom Hanks and TODAY co-anchor and Hidden Heroes Ambassador Savannah Guthrie, Young is a part of night honoring the more than 5.5 million Americans caring for a wounded, ill, or injured service member or veteran at home. The event will also celebrate the milestone of the organization’s tenth anniversary.

Chris Young has become a pillar in the country genre. Since signing his record deal with RCA Nashville at the age of 20, he has amassed over five billion career streams and 13 number one hits, eleven as a songwriter. Named “one of his era’s finest traditionalists” by the Associated Press, Chris is an international ambassador for country music, performing to capacity crowds around the world. With a hit-packed set that highlights his twelve chart-toppers—including back-to-back No. 1s “Losing Sleep,” “Sober Saturday Night,” “Think Of You,” and “I’m Comin’ Over”—the Grammy and ACM nominated vocalist’s most recent headlining tour played to over 400,000 fans in 3 countries.

“We are thrilled for Chris Young to be joining us in Washington, D.C. to honor our nation’s hidden heroes and our Foundation’s tenth anniversary,” said Steve Schwab, CEO of the Elizabeth Dole Foundation. “As a proud member of a military family, with his sister and brother-in-law having served in the Marine Corps, Chris knows personally the sacrifices that come with military service. We are grateful for his support of our mission, and we can’t wait to celebrate our military caregivers with his amazing performance.”

Senator Elizabeth Dole was the first to call the nation’s attention to those caring for a wounded, ill or injured service member or veteran at home. Military caregivers face increased emotional and physical stress, financial and legal troubles, employment difficulties, and feelings of isolation due to the enormous responsibility and severe lack of resources for those caring for someone who served. The Foundation is committed to recognizing, supporting, and empowering military caregivers.

Register today to join us for an unforgettable evening celebrating our nation’s military and veteran caregivers.

Multi-platinum RCA Records Nashville global entertainer Chris Young has accumulated an impressive list of accomplishments, including membership in the iconic Grand Ole Opry, over 5 Billion on-demand streams, 13 Million singles sold, 13 career No. 1 singles, 24 R.I.A.A. Gold/Platinum/Multi-Platinum certified projects and numerous ACM, AMA, CMA and Grammy nominations, as well as wins for Performance of the Year and Collaborative Video of the Year at the CMT Music Awards. These accomplishments and more landed him in the Top 20 of Billboard’s top country artists of the decade.

“Famous Friends,” – Chris’s double-platinum-certified, multi-week chart-topping song with Kane Brown – is the title track to his “most personal album to date” (Forbes). The song earned the top spot on Billboard’s year-end Country Airplay Songs chart for 2021. In addition, the “booming duet” (Tennessean) “At The End Of A Bar” with Mitchell Tenpenny is Chris’s current No. 1 single from his 8th studio album, Famous Friends. The newly released Famous Friends (Deluxe Edition) features six new sides, including collabs with Old Dominion and Jimmie Allen, for a total of twenty tracks.

Named “one of his era’s finest traditionalists” by the Associated Press, Chris is an international ambassador for country music, performing to capacity crowds around the world. With a hit-packed set that highlights his twelve chart-toppers — including back-to-back No. 1s “Losing Sleep,” “Sober Saturday Night,” “Think Of You,” and “I’m Comin’ Over” — the Grammy and ACM nominated vocalist’s most recent headlining tour played to over 400,000 fans in 3 countries.

For more information and to catch a Chris Young show on the road, visit chrisyoungcountry.com and join @ChrisYoungMusic and his more than 6 Million fans on TikTok, Instagram, Facebook and Twitter.