Being a Military caregiver means that I am constantly being an advocate for my husband, continuously assessing his health and safety to ensure that his needs are met and to improve his quality of life. 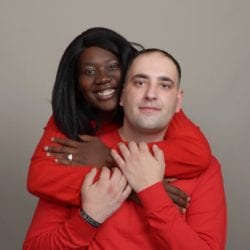 Can you describe a milestone or moment that made you feel empowered or inspired as a caregiver?

Speaking up and demanding more tests at the VA for my husband. I had been pushing the VA providers to have a CT scan on my husband’s back as he was having a hard time sitting or standing log hours. They would brush it off as his ongoing chronic pain. When they did the test, they found his back was getting worse. I felt empowered because if it were not for me, nothing would have been done and my husband would have gotten way worse.

What are the most significant lessons you’ve learned from being a caregiver?

I have learned the importance of self-care. I need to be healthy and happy to be able to care for others.

It’s a long road ahead; there are good and bad days, ups and downs. Be optimistic; enjoy the good days while it lasts. Take a break when you need it and yes, you are strong but you can also get tired. It’s ok to ask for help.

WWFS provided me with a much-needed family vacation to Florida. They also provided compensation for respite services I needed, such as doctor’s visits.

Trizer’s husband Jason suffers from injuries that resulted from his service in the Army, while deployed in Afghanistan. She met him while he was going through the medical evaluation. Trizer found him at his worst. He was suffering from invisible wounds, post-traumatic stress disorder (PTSD) and traumatic brain injury (TBI). He was also experiencing chronic pain. As the invisible wounds began to manifest, he suffered from memory issues, hypervigilance, depression, anxiety, fatigue, and more. But Trizer sees the true Jason behind his injuries. With assistance from the VA Caregiver Support Program, she and Jason are making progress, and focusing on transition steps that allow Jason greater and greater independence. After Jason was not able to find a job who could accommodate his injuries, Trizer started her own business and found a way to expand her social work business to carve out the perfect position for him, as well as for veterans and caregivers with similar stories.

They met eight years ago at the Garden of the Gods in Colorado, and go back every year as a tradition. Jason continues to shower her with flowers and has told her, “Thank you for giving me a reason to wake up every morning.”

In her role as a Dole Caregiver Fellow, Trizer hopes to shed some light on the importance of supporting caregivers’ wellbeing. In order to continue providing care, caregivers need to avoid burnout, manage stress, and take care of their physical and mental health.