The moment I realized that I was a caregiver was the most empowering moment... I could begin to identify with some of the struggles caregivers face and seek out a community of support. 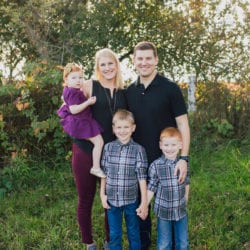 I had been providing care to my husband for years before I realized there was even such a thing as a military caregiver. I was lucky enough to know a few friends though Team Red, White & Blue who were registered caregivers with the VA and they mentioned caregiving. That moment changed how I understood my role with my husband. I started to realize the amount of constant stress I was under and the extra ways I was caring for my husband. I’m so thankful for that conversation, as it led me to seek resources from the VA and to find the Dole Foundation. From then on, I wanted to share my story with as many people as possible to help others in a similar position.

Since becoming a caregiver, my stress level has skyrocketed. For so long I didn’t realize how large a toll the stress was taking on my body until my health began to worsen as a result. Finding support within the Hidden Heroes Caregiver Community was vital and I began to understand how to better care for myself to be a better caregiver.

I would tell other caregivers to prioritize self-care. It doesn’t have to be something huge, but carving out a little time for yourself to recharge each day is vital to keeping ourselves mentally and physically healthy.

The Military & Veteran Caregiver Experience Map has been a huge resource for me. What stood out to me immediately is how the map is a cycle, and that our experiences can often circle back to the beginning with a new set of issues. It helped to validate my experiences by explaining each step of this journey, which made me feel like I wasn’t alone in this process.

Team Red, White & Blue has been a huge resource for our entire family. We have forged lasting friendships with other members, have been given leadership opportunities and skills, and have been able to raise awareness for veterans and their families in our community in amazing ways. I love that it is a place for everyone—veterans and civilians alike—to come together in support of one another. Being able to participate alongside my veteran has helped us to bond over shared experiences and advocacy.

Kelly Hunsucker of Stockton, California is a military caregiver to her husband Josh. They met while attending the University of California Davis where Josh was in Army ROTC.

After a 15-month deployment to Iraq in 2008 as a light infantry platoon officer, Josh sustained both visible and invisible injuries that include post traumatic stress and debilitating migraines. Josh separated from the Army in 2010 and pursued a law degree with Kelly’s support.

Kelly continues to support Josh as a caregiver around the clock. She manages his medications, helps to schedule appointments, takes care of household chores, supports him with calming techniques during stressful days, and steps in to make the necessary adjustments to daily life when a migraine lasts for days, all while simultaneously caring for their three children and maintaining a robust volunteer schedule. She also works to encourage Josh to go out and be active as much as possible, supporting him as he trains for half marathons. Kelly sometimes struggles to dig deep to help her family when she herself feels burned out. Yet, because of other caregivers she has met, she feels supported and able to empower others in similar circumstances.

Kelly is the Chapter Captain for the Stockton chapter of Team Red, White & Blue, and organizes local events that bring veterans, their families, and fellow community members together to participate in various physical and social activities. Kelly has made tremendous strides in bringing veteran and caregiver issues to the forefront in her community, spearheading the first ever “Stockton Veterans Week,” and helping the City of Stockton become involved in the Foundation’s Hidden Heroes Cities program. She also serves as a Red Cross Military and Veteran Caregiver Peer Mentor, and is a substitute teacher and board member at her children's school.

As a Dole Fellow, Kelly hopes to continue to raise awareness of the struggles that military and veteran caregivers face by sharing her story with as many people as possible, emphasizing the importance of prioritizing both self-care and mental health. She also wants to shine a light on how children respond to caring for an ill or injured parent, as they often assume secondary caregiving roles.