Being a caregiver means it is my turn to make sure that my veteran's wounds do not stop him from living the best life he can and the best life we can together as a family. Know your resources and do not ever give up. If you and your service member or veteran are unsatisfied with the answers or outcomes, keep pushing.

My husband fought to defend our freedoms and came home wounded. Now, it is my turn to make sure that his wounds do not stop him from living the best life he can and the best life we can together as a family.

The most important change of taking on the role of caregiver also means that I have my husband by my side, so I would not change that for anything. There have also been difficult changes and sacrifices I have had to make, including giving up my career in turn for managing and being able to focus on my husband’s health, while also building our family through IVF, which has been a challenge in and of itself.

Project Sanctuary has allowed our family to come together when we were lost. We needed assistance with some post-combat injury barriers that I was at a loss of how to resolve. Project Sanctuary committed to helping our family not only overcome these barriers, but thrive. I would recommend Project Sanctuary because the focus is on the WHOLE family, not just the Veteran/Service Member. The program is also eligible for all eras and services. 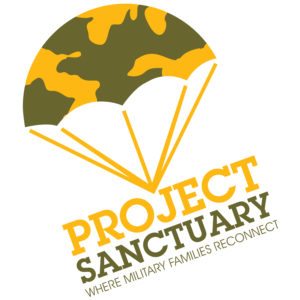 Operation Enduring Warrior has allowed our family to thrive in meeting goals that would not be possible without assistance. I wanted to do a Spartan, but I do not like the idea of my husband’s injuries constantly leaving him on the sidelines. OEW has allowed our family to not only meet this goal, but helps support my husband continuing to live an active lifestyle as well as becoming a support for and extended part of our family. The organization is an all volunteer organization. They are one of the few that truly tailor to the exact needs, wishes, and wants of the Veteran and their Caregiver/family. The team is incredibly supportive of the Caregiver dynamic and encourages independence for all. Purple Heart Homes (Colorado Chapter) has allowed us to stay in our own home and eliminate barriers to our physical environment to keep Tyler as independent as possible. Without their help, Tyler would not be able to play outside with our sons, would not be able to access our basement where his workshop was also built for him, and our home gym to help keep him healthy. Purple Heart Homes serves Veterans of all eras who have received a Purple Heart. Their goal is to assist in modifying the Veteran’s home to promote independence and remaining in the home, which is crucially important to quality of life. Crystal and Tyler Wilson’s bond grew out of circumstances unlikely to produce a relationship, let alone marriage and parenting. Despite great odds, they have built a fulfilling and rewarding life together that began as a provider-patient relationship and grew into a love that surpassed physical limitations through grit and belief in the impossible.

After graduating with her master’s degree, Crystal moved to Denver, Colorado, where she was offered a job with the opportunity to start an adaptive sports program for veterans. There she met Tyler, who in 2005 was injured in Afghanistan, paralyzing him from his torso down and causing other medical issues from wounds sustained that day.

Tyler came to Crystal’s clinic after experiencing some of the lowest moments of his life yet was committed to putting in the work to make progress. Tyler challenged Crystal’s professional knowledge and strength and became one of her biggest success stories. Little did Crystal or Tyler know how great an impact they would have on each other, and three years later realizing there was undeniable chemistry, they were married. Their relationship continued to grow, supporting each other through many ups, downs, good times, bad times, and everything in between.

Crystal balances helping Tyler with activities of daily living and taking care of their two young children. Tyler is enrolled in school, studying finance, and participates in adaptive sports activities, while Crystal is studying to become a firefighter/paramedic.

Crystal’s best day as a caregiver was when she invited their new neighbors to a surprise party to celebrate Tyler’s Alive Day—a commemoration of surviving a nearly fatal incident—in a community park. At the time, they were new to a neighborhood not familiar with the military community, so she explained what his Alive Day meant and asked neighbors to spend an afternoon with them. When all the families were together, Crystal and Tyler brought out his adaptive sports equipment so that he could play with the kids. For the first time, they felt that his Alive Day was about more than just what happened in Afghanistan; they saw it as a chance to teach people about living with disabilities and becoming a true part of the community. It was a day of celebration and pride.

Post-injury love is to be commended, as it takes a strong amount of faith and will to manage the challenges of injuries like that of Tyler's. Crystal and Tyler are now parents to two healthy boys. The couple works with IVF4Vets and has lobbied on Capitol Hill to advocate for VA coverage of fertility treatments, address combat-related infertility, and normalize the use of IVF, which helped create their miracle family. They played a critical role in Colorado becoming the 18th state to financially support IVF treatments. Crystal and Tyler continue to help make progress toward permanent solutions for infertility coverage.