“I Know a Hero When I See One,” Tom Hanks in New PSA 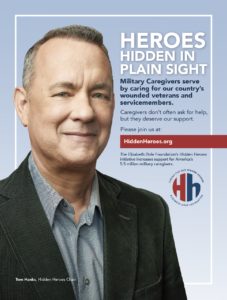 “Military caregivers don’t often ask for help, but they deserve our support,” says the Oscar-winning actor. “Senator Elizabeth Dole can be pretty persuasive, so that’s why I’ve raised my hand and have committed to Hidden Heroes. Together, we all can bring military caregivers out of the shadows to honor their service and strengthen their support systems.”

Broadcast spots have been distributed to television stations across the country. A print version will appear in national magazines such as Redbook, Essence and Town & Country, starting in October.