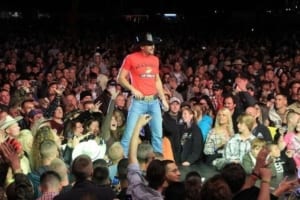 Washington, DC (October 6, 2020) ⎯ The Elizabeth Dole Foundation announces Tim McGraw as the third recipient of the Tom Hanks Caregiver Champion Award in recognition of his outstanding support for military and veteran caregivers, the 5.5 million loved ones nationwide caring for a wounded, ill, or injured service member at home. Previous recipients include Actor and Hidden Heroes Campaign Co-chair Tom Hanks for whom the award was named and Former First Lady Michelle Obama.

Tim McGraw became personally invested in caregiver programs after his experience as a caregiver for his father Tug McGraw, who died of brain cancer in 2004. McGraw serves as the Honorary Chair of the Tug McGraw Foundation, which was established by Tug McGraw to enhance the quality of life for kids and adults with debilitating neurological brain conditions such as brain tumors, traumatic brain injury, and post-traumatic stress disorder. The Tug McGraw Foundation has helped many veterans and their caregivers through their programs and is a dedicated partner of the Elizabeth Dole Foundation.

“We are thrilled to honor Tim McGraw this year,” said Steve Schwab, CEO of the Elizabeth Dole Foundation. “He understands from both his personal experiences, and his support of other caregivers, exactly what our military and veteran caregivers go through on a daily basis. Inspired by what he learned from caring for his father, Tim has used his platform as one of our nation’s top entertainers to help the military community find resources for invisible injuries. This continues to be a critical need for caregivers, and an important component of our work at the Elizabeth Dole Foundation.”

The online event is accessible to the public at no cost. Registration information and streaming details for the event can be found here.

Senator Elizabeth Dole was the first to call the nation’s attention to the 5.5 million Americans caring for a wounded, ill, or injured service member at home. Military caregivers face increased emotional, physical stress, financial, legal troubles, employment difficulties, and feelings of isolation due to the enormous responsibility and severe lack of resources for those caring for someone who served. The stresses military and veteran caregivers face have been exacerbated by the COVID-19 pandemic. The Foundation is committed to recognizing, supporting, and empowering America’s hidden heroes.

Heroes and History Makers is a part of a month of virtual events hosted by the Elizabeth Dole Foundation that will bring military caregivers, local, state, and federal leaders together from across the country. Other events include the 5th Annual National Convening for Military and Veteran Caregivers, “Caregivers at the Forefront: Supporting Caregivers in Times of Challenge” co-hosted by the Elizabeth Dole Foundation, the U.S. Department of Veterans Affairs and Philips on October 19. Military and veteran caregivers will also have the opportunity to participate in virtual workshops and family fun activities from home from October 1-November 1.